Plato believed the ultimate reality of life existed as perfect Platonic forms. In Plato's ideal world every person has a defined role. Each person is trained and placed in a position that he or she can perfect like in the diagram at the left. All the positions unite together to form the perfect political order. Each political order lives in a world of endless conflict with every other state. His utopian world is one of perfectly ordered societies where everyone has a role engaging in endless conflict with other states.

Welcome to the ideal world of football.

In all of athletics, no sport possesses such an array of defined specialities, and very few are interchangeable--linebackers do not become offensive linemen and linemen certainly do not become halfbacks. This specialization makes possible the elaborate plays and intellectual chess that occurs at each reset between plays. Each play resembles a Platonic ideal requiring perfect execution. Each player has intricate responsibilities with multiple options to engage on every play. 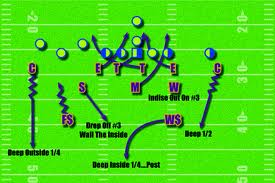 In Plato's utopia each person devoted their life to mastering their position. In football, all position players practice by themselves. The offense practices apart from the defense like two states in a confederation. All come together for scrimmages, but most of a football player's life is spent with their position coach and fellow position players. The specialization enables the incredible numbers of plays in a modern playbook as well as the infinite variations and reads that unfold with each play. Every player must recognize the multilayered patterns implied within each emerging play. No sport demands such intellectual and pattern recognition skills of each player. It is a game of head, discipline and violence. This generates possibilities that intrigue and infuriate avid followers.

The Platonic form of offense meets the Platonic form of defense. Each play unfolds as an ideal diagrammed in the coach's mind. Plato would be proud. And yet. And yet. The plays are run by humans, and the baroque diagrams of ideal play crash into the jostling reality of unpredictable improvising actions of humans. One side seeks offensive perfection, and an equally committed group of defenders strives to disrupt the perfection. The only time you see the ideal executed flawlessly occurs when football oligarchs bottom feed against hapless DII schools.

Plato's utopia fell apart over conflict; football reaches its fulillment in that conflict. 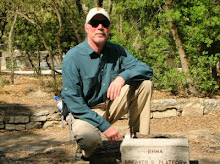